You Can’t be a Christian and Work in Las Vegas

The year 1970 was a momentous year for the Imperials. We were singing with Jimmy Dean and Elvis and trying to juggle our gospel concerts in between. That year we were with Jimmy two full months and with Elvis for two full months, for a total of four months in Las Vegas. I’ve heard some say, “you can’t be a Christian and work in Las Vegas.” Ironically, we found a great church away from the Las Vegas strip and though I got to bed quite late on Saturday night, when I could, I made my way to that church on Sunday morning. Some really special friends were made there. Also, there was a chaplain who had a bible study every week right there in one of the hotels on the strip and though there were only 10-12 people, it was a very meaningful time for me. When you’re bombarded nightly with the “evils” of casinos, as a Christian, it was important for me to insulate myself from their attractions. Avoiding the gambling part was the easiest part because I HATE to throw away money that I could have kept in my wallet. Nightly I saw poor souls playing the one-armed bandit and the majority never won. You hear about the one or two that won big but you never hear how much it took for them to win, nor do you hear about the thousands who never win but keep trying because they are so deeply in the hole they have to try to get back to even. I never had an attraction for gambling. 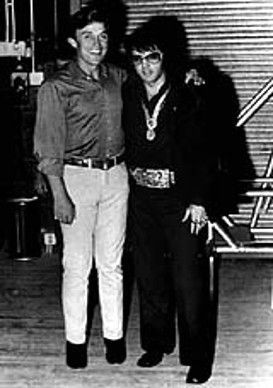 Because I looked like a teenager, I also had trouble being taken seriously. I actually got stopped one night walking through the casino after the second show on my way to my apartment. They were sure I was underage and because I was, in their mind, an unaccompanied minor, they checked my ID to see if they were right. Of course, they weren’t, but I was amused at their attempts to put me out of the casino. I am not perfect by a LONG shot, but if I had my way, I would NEVER darken the door of a casino. Think about it; they don’t build those huge, plush casinos by losing more than they take in.